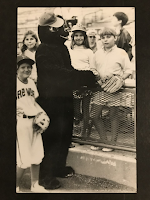 Hi from Tim. In my life I've been baseball lucky. I was 10 years old in 1970, and the very first field manager of the Milwaukee Brewers moved in across the street and lived there during the three summers he managed the team. I played with Dave Bristol's sons and daughter at County Stadium, on the field, in the players' clubhouse and in the bullpen. They even let us shag batting practice in those days. Can you image kids today getting lumps on their heads from chasing major league line drives? That's me on a postcard during the Brewers first season, with "Brew-Bear" and Mr. Bristol's daughter "Sissy" (in full uniform). It's one of the reasons I'm a big fan of Bud Selig (see below for his book). He brought baseball back to Milwaukee after the Braves left town. 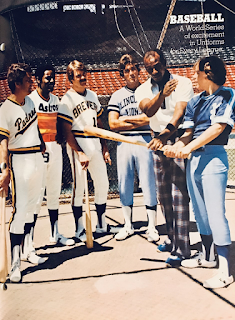 A few years later, my father's friend asked me to model sports gear for his employer, Medalist Industries. I was stunned when I ended up doing photos for their catalogs with Bart Starr and Cubs legend Ernie Banks. That's me, at 16 years old, with Mr. Banks as my hitting coach at County Stadium. He was a glorious man with a priceless smile who was fond of saying, "It's a beautiful day for a ball game. Let's play two." At the end of our photo shoot, he thanked me and he meant it. It was an act of humble gratitude that taught me more than words can express. So baseball is in my blood, and these recent books have given me the thrill I've needed in the game’s absence. 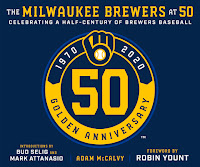 The Brewers' complete history is covered in a big, impressive (and heavy) book called The Milwaukee Brewers at 50: Celebrating a Half-Century of Brewers Baseball, by Adam McCalvy. They could have built Miller Park out of these books! The giant photos from every era are a fan's delight, and the first-hand stories from the biggest names in the organization have fresh insights that surprised me. With introductions by Bud Selig and Mark Attanasio, and a foreword by Robin Yount, this is a special collector's item.

Let's Play Two: The Legend of Mr. Cub, The Life of Ernie Banks, by Ron Rapoport is a biography of the greatest Cubs player ever, but it's ok Brewers fans. When I was a kid the Brewers were an American League team, with no Cubs rivalry at all. It was common for my friends to listen to both Brewers and Cubs games, and this book is about the man pictured with me above, a man anybody could love. He was more complicated than his public image, of course, but the book confirmed one important thing for me. Everyone in his life, from a high school football coach to a veteran major league umpire, said you could never get him to be negative or say a bad word about anyone. He never even argued with umps about pitches! So the way he treated me was true to him. Rapoport has also given us a highly detailed look at more than the man, a look at many aspects of Chicago and also at baseball during a time when black players were just getting into the majors. Hank Aaron plays a leading role, too!

Nobody is more qualified to tell us the story of the last 50 years of baseball than former Brewers owner Bud Selig, who went on to become commissioner of baseball. For the Good of the Game: The Inside Story of the Surprising and Dramatic Transformation of Major League Baseball is genuine and fast moving, and I was fascinated by it. Selig has seen it all. He's effusive in praising the people he loves, both inside and outside baseball, but he's also bold about his frustrations and the people who caused them. One example of this is Selig's expression of deep friendship with Henry Aaron and the irritation he felt with representing baseball as Commissioner while watching Aaron's home run record being broken by Barry Bonds, a man he obviously does not like. I've never really understood all the flack Selig has taken from some fans, because I believe he's done so much to make the game better. 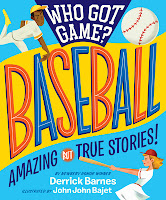 Who Got Game? Baseball: Amazing but True Stories, by Derrick Barnes is a great book for kids who already love baseball and for those just getting started. Barnes, the award-winning author of the picture books Crown and The King of Kindergarten, has given them a reason to get excited during a time when the game is on hold. These stories are brief but dramatic, and clearly laid out for understanding. It makes this a nice book to share with early readers, and it will also interest kids up to 12 years old. Barnes has a storyteller's flair and energy, and he teaches some baseball basics along the way, making this a good starting place for new fans. These stories are often not about the usual big names but rather about the underdogs who succeeded, the great comebacks, the courage of people who were pushed aside but made it into baseball anyway, and of course the strange statistics that baseball lovers talk about endlessly. It's funny, and fascinating, and this baseball fan loved it at 60 years old. Barnes belts it out of the park!

Child of the Dream: a Memoir of 1963, by Sharon Robinson isn't a baseball book as such, but Sharon Robinson was at the heart of both the game and the Civil Rights movement. As she turned 13 in January of 1963, her father, baseball legend and lifelong activist Jackie Robinson, was deeply involved with raising money for the cause while working side by side with Dr. Martin Luther King. Sharon heard firsthand about the roller coaster ride of the movement. It's an enlightening story of the pivotal year in American history, but it's equally a tender story about the loving family of an American hero and the story of a girl just becoming a young woman. It's a gift to lovers of history and baseball, and a wonderful addition to coming of age stories for kids in their early teens.

There are more that I haven't read, too! A book of life stories and life lessons by Willie Mays called 24: Life Stories and Lessons from the Say Hey Kid looks cool! So does Lou Gehrig: The Lost Memoir. With luck, we'll be somehow seeing or hearing games soon. Until then, enjoy a baseball read!