From Jenny: A blog post otherwise titled, "Jenny learns all about bees, jazz, stand up comedy, and Korean barbecue!" 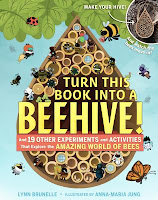 Here at Boswell, we’ve been doing our best to inspire kids to read through our school author visits — virtually, of course. Over the past few weeks, three authors visited seven schools from St. Francis to Greenfield and Milwaukee to West Allis. Lynn Brunelle told students all about the superhero of pollination, the Mason Bee, who is featured in her fun project/book, Turn This Book Into A Beehive.

During her Welcome to Jazz school presentation, Carolyn Sloan introduced jazz to young children. Her lively picture book includes sound buttons to hear the instruments of jazz — the rhythm section with its banjo, drums, and tuba, and the leads, like the clarinet, trumpet, and trombone.

You would be amazed at how much time and effort authors put into making their presentations engaging, informative, and educational for students. Honestly, I am awed by the kindness and generosity of our visiting writers, and even as an adult, I always come away learning something new. (Yes, that was me giving my college-age daughter a mini-lecture on bees at the UW-Madison Arboretum last Saturday.)

Along with University School, Boswell also hosted debut novelist Jessica Kim, author of Stand Up, Yumi Chung! I watched Jessica’s presentation along with the students, and was she ever a hoot! She offered plenty of great writing advice along with a fun presentation about her new book, the perfect read for anyone whose parents sent them to summer test prep when they would’ve much rather gone to comedy camp. Stand Up, Yumi Chung! received three starred reviews, an amazing accomplishment for a first novel. “Kim has woven a pop song of immigrant struggle – authentic and hilarious,” said Kirkus Reviews, and School Library Connection wrote “Uplifting… a timeless and heartwarming tale of individuality and understanding. Readers today will relate to the ongoing battle between parents who want the best for their children and the children’s desire to forge a path of their own.”


Here are a few of my takeaways from Jessica Kim’s talk to USM students:

Jessica started by telling us all about her main character, eleven-year-old Yumi, who feels awkward and nervous about starting middle school. Her #shygirlproblems make finding friends at her fancy private school seem hopeless. Comedy is her passion, and she watches YouTube comedian Jasmine Jasper, who gives tutorials on how to become a standup comedian. 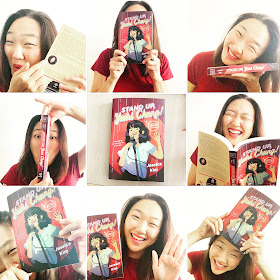 Yumi’s Korean immigrant parents don’t get it at all. Comedy? What a waste of time! Why can’t Yumi spend hours studying for a big test that could lead to a scholarship? Then she could stay at the fancy private school her parents can no longer afford because their Korean barbecue restaurant is having a hard time (despite her dad’s new karaoke machine). Studying in the library, now that would be a great use of summer vacation! So off Yumi goes to dreaded summer test prep. But right next to the library, someone has opened a new comedy club. Yumi peeks inside and hears the voice of none other than YouTube star Jasmine Jasper, and she’s teaching a comedy summer camp for kids! Jasmine mistakes Yumi for a missing camper, and Yumi accidentally on purpose joins the comedy summer camp. Pretty soon Yumi gets caught up in a web of lies with both her family and her new comedy camp friends. As this case of mistaken identity unravels, Yumi must decide to stand up and reveal the truth or risk losing her dreams and disappointing everyone she cares about.

Next Jessica told students more about herself. Her parents immigrated from South Korea in the late 1970s, and Jessica was born in California. In South Korea, her dad worked as a pharmacist, but his degree didn’t transfer over to America, so he opened a small produce shop called Farmer Boy. The shop sold fruit, vegetables, and Asian products that were hard to find in the community. Jessica and her two sisters grew up celebrating both American and Korean traditions. Most of the time, she felt like she had one foot in each world. A feeling of not quite belonging in either world became the topic she wanted to explore through her writing. In high school, Jessica wrote for the school newspaper and interned at the local newspaper. While studying at UC Berkeley, she worked at an after school program near the university. That’s when she realized she loved kids and decided to become a teacher.

After several years as a teacher in California, Jessica and her husband crossed the country to New York for his job. Wow, was life on the eighteenth floor of a high rise different from life in Los Angeles! The loneliness of living so far from home inspired Jessica to start a blog for her family and friends. She posted pictures and told stories about her day. Surprisingly, her readership grew to include people she’d never even met. “Why don’t you write a book, Jessica?” they commented. That idea became like a little seed planted in her brain, but it wasn’t until she moved back to California that she decided maybe she should write that book. 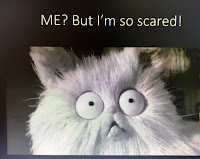 So the decision was made. Jessica would become a children’s book author. YAY! But how does a person who doesn’t even know any children’s book writers suddenly become one? Maybe Google knew. Jessica literally typed, “How do you become an author?” And Google answered, “Find a writing community.” So she found the Society for Children’s Book Writers and Illustrators (SCBWI) right where she was living in San Diego. But it sounded so frightening! A bunch of writers sit around, and you read your work out loud to strangers, and then they spend the next half hour critiquing you and telling you what’s wrong with it! She was like this scared kitten

But she quickly learned that writers never get better unless they know what’s wrong with their writing. At her first SCBWI meeting, she took fifteen minutes to find the courage to get out of her car and walk into the building. Learning how to write, taking classes, joining a writing group, attending book events, and finally finishing her young adult project took a whole year and a half. Then finally it was time to email literary agents asking them to represent her work. And even after writing to fifty agents, no one wanted to publish her book. She was devastated. Writing a book had taken so long, and sending it out into the world took so much courage, only to have it rejected.

So she quit and took up gardening and making afghans.

But then Jessica got some feedback that exited her. Instead of writing YA, had she thought of writing for middle grade kids? Jessica’s YA book was about a teenage girl who wants to go to culinary school instead of college, but that didn’t make sense for an eleven-year-old. But she still wanted to tell a story of being torn between two cultures with parents who totally didn’t get their daughter’s interests. Maybe she could make changes, but keep the heart of the story. Maybe stand up comedy might even be even better than her first idea. Excited with the new premise, Jessica rewrote her book in just six months. And when she sent it out, this time she got a yes, and that’s why it’s a book today! 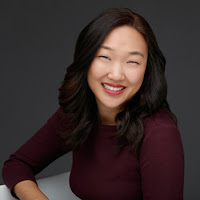 Read a lot - Find a book you love, and read it three times.

Get lost in the story and the adventure. Read as a reader.

When you are writing your own scene, go back to the book and find where you saw a similar emotion, jealousy for example, and try to use some of the strategies that the author used in your own way with your own words.

I’m so glad Jessica Kim joined us for a virtual school visit, and I hope she can visit Milwaukee in person for her next book. In the meantime, follow Jessica on Twitter at @jesskimwrites and Instagram at jesskimwrites.
chrisoftheinterwebs at 8:27 AM