Tim Once Again Has Gone to Minnesota in His Mind

From Tim: Nobody mentioned it, but I noticed (after the fact) that my first two 'Minnesota in My Mind' blogs were all male authors. Really? I normally read at least as many women writers as men. It was just a quirky trend in Boswell event books I liked, but it bothered me. I checked to see if I’d read any Minnesotan women, with limited success, and then this happened! I was given an advanced copy of Jackie Polzin's new book called Brood. It's a wonderfully quirky and richly human debut novel, and it lit a fire in me to write about Minnesota's women writers.

My advice about Brood is to give it some time. Let the book peck at you for a while, and you’ll be rewarded. I didn’t know that I completely loved it until the last three pages. Then I suddenly knew. Completely. This book is all of life told in the story of four backyard chickens. Our narrator’s voice comes straight at us - a bit sassy, sly, mostly sure-minded - even as she maintains a subtle neighborhood diplomacy. The contrast is wonderful. Chickens help her tell us boldly about loss, and the inescapable hardships of living, but she’s not bitter. She sees the beautiful workings of her simple birds and of people: her chicken-hesitant friend Helen, her staunchly independent mother, her very reasonable husband Percy, the awkward neighbors, and how all of life creates dust. Mix in Minnesota’s climate extremes and a changing neighborhood. You’ll get a growing sense that you’re reading something very special. Let Brood peck at you. There’s nothing quite like it.

Brood triggered the memory of a great book I read years ago called History of Wolves by Emily Fridlund. Fourteen-year-old Madeline, called Linda, or "Commie" or "Freak" at school, is growing up in Loose River, Minnesota, the Walleye Capitol of the World, a place where summer tourists crowd a very small one-street town. Her parents and other families came in the early 1980s as a group, trying to create one communal family. Long ago the others gave up, leaving Linda, with her mother and father, living in a tiny cabin. She struggles with isolation but doesn't hesitate to introduce herself to the Gardner family, at their beautiful new house across the lake. Patra and Leo, with their four-year-old son Paul, become the center of Linda's story as she helps to care for Paul. She has a strong, steady voice and a direct honesty that made me proud of her. Even as her story takes a frightening turn in an ever more complicated household, I wanted to stay with her and hear what she had to say. It's an exceptional debut novel.

There are certain writers who deserve a lot more of my time. Louise Erdrich is one. Clearly among America's best, not to mention a beloved bookstore owner herself, she has several titles in my collection for someday. What I have read is The Birchbark House, the beginning of a children's series she wrote to retrace her own Ojibwa family history. It opens with a baby girl found on Lake Superior's Madeline Island, the only person left alive when Smallpox took the rest. Yes, I know the island is not in Minnesota, but those divisions came long after Ojibwa origins, and Erdrich is a Minneapolis icon. As an elementary school teacher, I was always grateful for the beauty of this story and for the confidence I had in its truth. I will certainly keep coming back to Minnesota with this series and with Erdrich's adult novels.

And poetry! Margaret Noodin is a professor of English and American Indian studies at UW-Milwaukee, but she earned two degrees from Minnesota schools, and it’s where she learned the language of the poems in What the Chickadee Knows. They’re written in Anishinaabemowin, side by side with her English translations. It’s “the language of the Odawa, Potawatomi, and Ojibwe people centered in the Great Lakes region.” I don’t know the language, but the words are visually thrilling. I can begin to imagine their lovely sounds, and I love seeing the continuation of First Nations languages. Their descriptions of the land and life, time and loss, sorrow and celebration have the feel of a natural world we all long for. They're simply stated and beautifully complex. This is one of the most precious book discoveries I've had, and it's very exciting to know that Margaret teaches up the street from Boswell!
(Editor's Note: the differing spellings of Ojibwa / Ojibwe are not typos, but rather the spelling utilized in the two authors' respective books.) 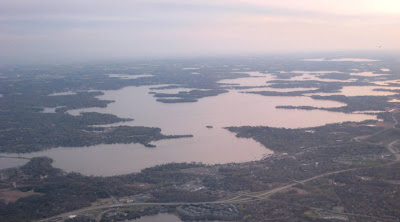