I'm in love with John Ashbery's new collection of poems. I have to admit, I'm no poet, and I'm not very widely read in poetry (historic or contemporary...I have a very hit-or-miss knowledge of the artform generally), but there is something about this collection that's captured my imagination, and I want to share it with you.

Ashbery is a poetry of magnitude. The inside flap of "Quick Question" features the supreme blurb: a quote from Harold Bloom comparing Ashbery to Whitman, Dickinson, Stevens, and Hart Crane. He's published more than 20 book previously, won a Pulitzer, etc. etc.

You have to see this in person, but let me attempt to describe it. The coverart: a background of crumpled paper with two uneven question marks, the second bolder than the first, creating a downward slope as you your eyes scan across the cover﻿; the author's name and title in evenly sized, capitalized, sans-serif typeface, left-justified and moving very deliberately toward the bottom edge of the book; an absurdly decorative spine featuring floral patterns, bright colors and various textures, and the title and author's name in capitalized type-written typeface. This thing is freaking gorgeous.

﻿From the title poem: "Here in the museum we do not invite trouble, / only establishment woes, sort of. We can bet farther / and classier with no returns. Sometimes late at night / cars droned and paled: Splurge and repent -- / wasn't that the idea? It was your initiative / that brought us here, through the difficult part / of a city. Some angels / seemed to teeter on the wooden fence. / Were we all they knew?"

This is typical of the collection; simple, colloquial language structured grammatically to give the illusion of meaningfulness; various and juxtaposed images that put you into a strange state of mind, a state where the absurd is commonplace, a place where the nonsensical becomes familiar, a dreamlike, uncanny sort of place; and references to the reader in the second person ("It was your initiative / that brought us here") -- playful, almost accusatory, like finding pointed letters directed at someone else and lacking all other context, like feeling that such a letter was somehow still "meant" for you.

For those who fear nonsense (believe me, I'm typically such a person when it comes to poetry) -- the collection does have a cumulative logic (for instance: the image of a sunset as a great wall in the sky recurs as an image of hope in the face of mortality -- who knows, perhaps there are seraphim just behind that wall, perhaps the sky is a place from which we, too, will look down on these disparate images and efforts, perhaps things will make sense then), though it only emerges upon multiple, patient rereadings.

﻿Ashbery is in a long modernist poetic tradition. One that finds it's roots in T. S. Eliot and his ilk. His contemporaries include Ashbery's friend and (local) renown poet John Koethe (see Koethe's latest book of poems below). This tradition, I think, is a beautiful and complex. A bold counterpoint to the straightforward technical and analytic language of everyday American life. Plus, Ashbery is one of those poets whose body of work will give you a backlog of solid reading material.

(Koethe's most recent book of poems, available at Boswell.)

A Summer Reading List for The More Metaphysically Inclined...

***This post contains some strong language (some contemporary philosophers have tended toward examinations of linguistic vulgarity lately), though nothing intentionally provocative or offensive. So, there's that. It is also intolerably esoteric. So, there's that, too.***

A good friend of mine recently related some lore about the notorious American Pragmatist Richard Rorty. According to my friend, Rorty has remarked that it's about time that we come up with a word to express a concept that already has a well established usage: the book that is perpetually on the list of things that we are going to read next summer. I'm not sure if Rorty ever took his own advice here, but I will now. Let's call a book that falls into this category a "kunftigbuch." ("Kunftig" means future in German, and "buch" means book -- I think that's true, I don't actually know German...I just looked it up in a German-English dictionary I found in the language reference section...) Nevertheless, kunftigbuch sounds like an academic enough name to coin our concept, and pronouncing it feels expressive of the frustration that we all feel whenever we talk about such books (see examples below).

Here's an example of how to use this concept in conversation:

"Moby Dick? Oh yeah, that's one of my kunftigbuchs..."

"Crime and Punishment? Uhg, a kunftigbuch to be sure."

"I wish it weren't so, but I think Infinite Jest is the quintessential kunftigbuch. Maybe that's the whole joke..."

Often, books become kunftigbuchs because our reading lists never properly align with our schedules (I always seem to remember my vow to read The Brothers K about two weeks into the fall semester). In order to remedy this situation, here is a list of excellent new philosophy books just in time for summer! Print out this list, circle the one's that you have to get through, and come on down to Boswell! That way you can make sure that these books never fall onto your mental list of kunftigbuchs!

﻿Aaron James's "Assholes: A Theory" -- This book is a hilarious guide to a type of person that we are all to familiar with, the asshole. Assholes, James argues, are not merely rude or overly assertive individuals, they are a class of humans with an identifiable trait, they are people who "allow [themselves] to enjoy special advantages in social relations out of an entrenched sense of entitlement that immunizes [them] against the complaints of other people." With this conceptual definition in hand, James goes on to identify essential characteristics of assholes, social circumstances that tend to produce a disproportionate number of assholes, and ask the question of what our moral response ought to be to these repugnant creatures. Despite it's title (and it's irreverent take on a familiar social phenomenon), this book is actually a philosophically sophisticated work (applied ethics in a Kantian vein). James is a UC-Irvine professor who was Harvard trained, but he walks the line between popular philosophy and analytic rigor like a pro. (Also, if you like this, check out Harry Frankfurt's "On Bullshit," another philosophically sophisticated popular treatise.)

Jim Holt's "Why Does the World Exist: An Existentialist Detective Story" -- As the hope that an exhaustive physical explanation of the existence of the cosmos fades into the nineteenth century, a number of cosmologists have taken up the a closer examination of historical responses to the puzzle of existence that haven't yet found their way into the contemporary debate. In this thoughtful and compelling book, Holt examines several such positions and ends up suggesting that idealist positions that have been laughed out of contention might just hold a little more weight than we've given them credit for. An excellent and informed look at some core cosmological questions.

Douglas Hofstadter's "Surfaces and Essences" -- Love him or hate him, Hofstadter has become something of an academic methodology unto himself﻿. His latest book, co-authored with Emmanuel Sander, will please those who were taken with his wildly inventive debut "Godel, Escher, Bach," and moves along the same lines as the more recent "I am a Strange Loop." I can't say I always understand what Hofstadter is talking about, but, strangely, this never leads me to lose interest. If nothing else, this book succeeds as a object of art -- a postmodern narrative with its roots in this, the actual world. (Oddly, I don't think Hofstadter would mind that...he's not particularly keen on the distinction between analytic and literary prose...) Of course -- according to Hofstadter -- all of this is nothing more than analogy...as is his book...as is experience...as is language...as is "as is..."... ... ...

So there you are. Some philosophical texts to read and enjoy. Pick them up early in the summer, though. It might take most of August to recover from all that abstract thinking!
Unknown at 12:54 PM No comments:

Scene IV: An Interaction in the Children's Section 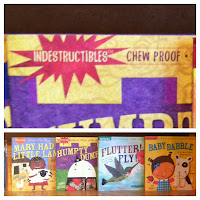 B: {Enter bookseller into section} Hi, can I help you?

C:  Is there such a thing as indestructible books? My daughter keeps eating hers.

B:  {gestures to line of books, chuckling} Until now, I thought these were! {pauses} I’m just picturing what her diaper situation must look like!

C:  Oh, we don’t used diapers. We use EC. Are you familiar with that?

B:  {without pausing} So, the money you save on diapers, you can spend on books!