A Fateful Heap of Days and Deeds

Warning: This one gets personal.

In 2005, I was struck with the urge to sidestep into seasonal work. I wanted out of my desk job and longed to get back into nature. The idea of working at a summer camp appealed, so I started sussing out opportunities, narrowing down things like location and activity focus to help decide where I might want to apply. In an e-mail to a friend, I noted an all-girls camp in Northern Wisconsin, as one of the top on my list. It was already nearing spring, however, and the timing didn't seem like it would work out. Then, I got a job working at a local bookstore and I "shelved" the idea.

A year later, realizing that summers were a bit quiet in my new line of work and still longing to do something different, I was granted the okay to be gone for a few months. Several applications submitted, two interviews, one job offer: the camp in N. Wisc. The director asked if perhaps an administrative position might be more suitable for me than working as a cabin counselor (I was 26, a little old for camp counselor-ing). I imagined sitting in an office at a desk and said, "No!" It was all the activities and being outside and playing dress-up and building relationships with kids that I was most excited about. 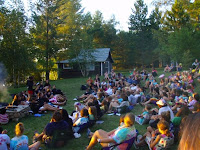 That first summer, my co-counselors and I were tasked with the well-being of ten 11yr-old girls for two sessions of four weeks each. The average counselor was a college freshman, seven years younger than me. I found myself counseling my co-counselors as much as the kids. So, the next three summers I spent in a liaison position, working closely with the staff, as well as the kids. All told, they were four of the most exhausting, challenging, rewarding summers of my life.

What does this have to do with books or bookselling, you ask?

Well, there comes a time, if you work with books in any capacity, where someone you know will write a book. And you will read it. And, if you're lucky, it will not be a painful experience and you won't have to smile and nod and hedge your words, while still being an encouraging friend. When that person writes a memoir, and it's about an entire family that you know and feel that you (and thousands of others) are an extension of, it gets even trickier.

It was just such a scenario when Tanya Chernov's memoir, A Real Emotional Girl, landed in my lap shortly before it's official publication. I was nervous. This is a book about people, and a place, that I know fairly well. It is also about a man I did not know, but that so many others did: Richard Chernov, Tanya's dad and a legend at camp. Richard died in 2001, and his presence was still everywhere in 2006: in name, in story, in the memories of campers who'd known him since they were young.

So, reading Tanya's story about her family - people with whom I'd developed a familial sort of closeness - was a special sort of experience. It revealed much to me of why they were who they were: the bits and pieces of their patriarch come alive in each of them, how the carrying on of this camp and his way of interacting with the kids and with nature is also their way of carrying his memory in their hearts, how even something as simple as meeting them at a particular place for tacos took on new depth when I realized how it was a favorite of the Chernovs as a family when Richard was still alive. It brought home how much they share of themselves with others - something I'd felt, but not known (truly) how linked it was with their own tragedy. 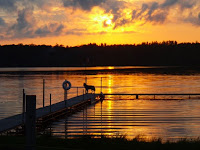 In 2008, my own tragedy occurred at camp, though not nearly at the level of theirs. One of my dogs, on one of his periodic weekend visits, was struck and killed by a truck on the highway just outside the camp borders. It was awful. And the Chernovs stepped forward and embraced my grief as if it was their own. One of the family dogs, Jimmy, who was elderly at that time and not very mobile, hiked a long ways up the hill to the entrance and stopped by my dog's side. When the campers gathered a few days later at a sacred placed on the grounds called the "service tree," and read notes, Barbara pointed out the Bald Eagle landing in the tree branches above us: these were things that carried great weight for them as they were symbols of their own passages through loss with Richard.

And that's the power here: that memoir, when done well, is how one person's story becomes one that others can relate to. In this case, Tanya's honest exploration of accompanying her father through illness and eventual death is more her story than his, and it's also the story of anyone who has had a similar experience with a loved one.

She writes about how instead of age-appropriate worrying about what classes to take her first years at college, or what to wear to friends' parties, she was becoming the parent - putting her sleeping-pill-goofy dad to bed at night, tucking him in with love and care. Any child who's gone through the terminal illness of a parent will know what a difficult thing that is.

With a bare honesty, Tanya shares how people can not only express profound amounts of love and gratitude when a loved one dies, they also can say surprisingly thoughtless things, especially when they feel a sense of "ownership" of that person; how selfish and oblivious people can be; how those in deepest grief find themselves comforting those barely touched, but touched nonetheless, by the loss. She admits to unhealthy choices - the kind of crazy things that people do in grief. And, at the same time, she illustrates what a blessing it must be to die at home, enveloped by immense love, and what a burden that is for those left behind to carry: the beauty and brutality of such a thing. In her father's final days, Tanya and her family wrote down everything he said, for anything could be his "final words," and I wept through them all.

In time, Tanya moved alongside her grief to a place where the ownership others felt on her family, and on her second home (camp), transformed into a feeling of pride: how lucky she and her siblings were to be the only ones who really got to call him "Dad." It takes a lot of strength to share the highly personal, intimate observing of the deterioration of a good man - especially one who many claimed as a member of their own family - and Tanya does it with a graceful openness. She shares with the world an experience that is hers and her family's, but in doing so, shares with us a man that many got to know and love - someone who those knew best, wouldn't get to have, or know better, any more - and, in a more universal way, shares what it's like to journey through grief:

It's like paddling a canoe through swampy waters on a beautiful October day, trying to reach a place you long to be, NEED to be, but that is inaccessible until others who have shared in your journey step in and carve away the brush and caved-in dirt, transforming that diminished pond into "what it was supposed to be": a place where you can sit and breathe, reminding yourself to "just be, just be, just be, just be." 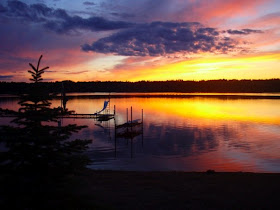 To the Chernovs:
Thank you for cultivating an extraordinary home and loving family, and for sharing both with so many others. The impact you have is a long-lasting, profound one. Clearly, Richard lives on through all of you: through your silliness and play, your warmth and generosity, your love of nature, your abundant laughter, and your open arms.