Tooting Our Own Horns

~
No less than three of our booksellers (2 past, 1 present) now have published work available for your reading pleasure!


Ashes, Ashes by Jocelyn Koehler
A forlorn maid known simply as Cindrelle toils like a servant on her family estate. She is given a glimmer of hope for deliverance from her plight when an invitation to the Harvest Ball arrives. She has but three nights to find her freedom and win the prince's heart. But who is the prince? Is the dark mystery surrounding him worth her devotion? A shadowy twist on a timeless tale that will leave you enchanted with its enigmatic ending.
The first story in an ongoing series of fairy tales set in the mythical and fantastical Nine Kingdoms.

Lesser Apocalypses by Bayard Godsave
Like "snow in the tropics," this collection is a revelation. Clustered as shell-shocked survivors, Bayard Godsave's Lesser Apocalypses occupy the edge of ruin. Though bleak, the stories contained here are enlivened, emboldened, by disaster. A man emotionally undone by his time inside a missile silo, by the turn of his key; a gas mask that reflects a marriage's murkiness; a domestic bomber whose conscience ignites every fuse; a post-nuclear war refugee facing concurrent adolescence, motherhood, and middle age; and two former cosmonauts disengaged from everything but each other are all vivid against a tenebrous backdrop. Underpinned by a series of prophetic vignettes, the book's blast zones are aglow—illuminating, through stark humanity, the blazing end of devastation. 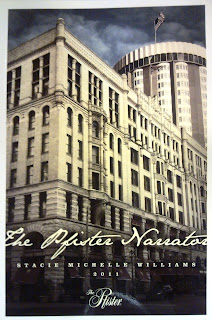 The Pfister Narrator, Volume II by Stacie Williams
Twice a week from May 1 to October 31, 2011, Stacie penned blog posts for the Pfister Hotel, as their writer-in-residence, known as the "Pfister Narrator." This book collects those posts in one place for offline reading. Whether interviewing a 92yr old Bay View resident about her mother serving Teddy Roosevelt, getting the scoop on room service, sharing a dog's eye view of the gallery art, or befriending folks from all over the world over cocktails and dining recommendations, Stacie's colorful, personable sketches provide a glimpse of a place that endures—and the people who cherish it.


1Kristopher Pollard is a Milwaukee artist who designed our awesome "The Book Was Better" t-shirt. He also gives great hugs.

2Deep Sea Studios is the freelance design brainchild of former Schwartz bookseller Joe Lisberg and his best friend, Tuc Krueger, a musician. They designed the Boswell Book Co. logos in use all over our shop.
StacieMichelle at 1:25 PM No comments:
‹
›
Home
View web version