Bookselling: The Missing Link in Particle Physics?, or, An Interview with Brent Gohde

Brent Gohde is one of the sexy minds behind Cedar Block, an organization responsible for art, science, and art & science events/ephemera since 2005. Starting at Luckystar Studio, followed by six shows at Milwaukee Art Museum, and now at Turner Hall Ballroom, they showcase some of the most creative minds in Milwaukee for large audiences. Their new show is titled "Sexy Results: Cedar Block's Dig for the Higgs and how the Quest Was Won." 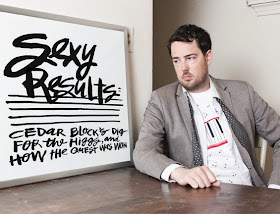 What in the name of Pluto's eccentric orbit is "Sexy Results?"

Well, by "Pluto" I can only assume you're referring to Asteroid 134340. With that established, Sexy Results is Cedar Block's first stage performance, taking place at Turner Hall Ballroom on February 18th, inexplicably but thankfully a part of the 2011-12 Alverno Presents season.

Previously Cedar Block has recruited local creative types to pay tribute to artists in exhibitions at the Milwaukee Art Museum, and we've organized one-of-a-kind science fairs for grown-ups. So it only makes sense we'd draw from our pool of brilliant Milwaukeeans to pay tribute to scientists, primarily those who have spent four decades searching for the Higgs boson particle at Fermilab in Batavia, IL. And who knows? Maybe we'll even find the Higgs in the process. I'm not convinced one needs a particle accelerator in order to do so.

Of course, I was going to ask what books influenced you as you developed this idea, but then you went and wrote "this show only exists because I worked at a bookstore," which means there's a juicier answer than just a list of titles and authors. Please give it to me now. 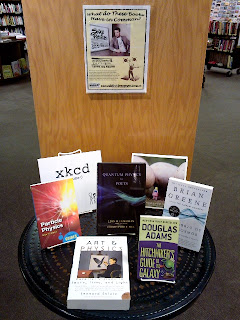 This show never would have occurred to me had I not spent three years as a bookseller at the Harry W. Schwartz Bookshop on Downer, when an author named Leonard Shlain (R.I.P.) visited Milwaukee to promote The Alphabet vs. The Goddess. Many artist friends pointed me to a book called Art & Physics, in which he made the argument that, while the two disciplines seemed exclusive, they were actually very similar in that they are developing a language to interpret the world around them. Shlain even goes so far as to suggest many artists have anticipated major scientific discoveries throughout history, so we're hoping to join that club. (I'd also like to credit my best friend in grade school, Brad Cage, for handing me a copy of The Hitchhiker's Guide to the Galaxy, which changed just about everything in my 12 year-old brain. Oh, and it was one of my great memories to met Mr. Adams at the Schwartz in Brookfield prior to his death.)

What books influenced you?

I'd like to think every book I've ever read has influenced this show. Those books are either directly related to our subject matter (Ian Sample's Massive, Shlain's Art & Physics), related in my mind (Jonathan Lethem's As She Climbed Across the Table, Adams' THHGTTG), or just responsible for warping my view of reality (anything by Mark Leyner, Denis Johnson's Jesus' Son, Nabokov's Lolita, Fernando Pessoa, David Foster Wallace, Flannery O'Connor, James Gleick, James Ellroy... what's my word-count here?). I even discovered some of my favorite visual artists through bound collections of their work (Anselm Kiefer, Paul Klee, and Jenny Holzer).

I seriously just deleted an entire paragraph of books people should read. You can take the bookseller out of the bookstore, but...

Do you consider yourself more scientifically minded or artistically inclined?

The great thing about that Leonard Shlain book is that we no longer need to choose between art and science. And that's one of the main messages we hope to communicate with this show.

We had the great opportunity to sit down with three brilliant physicists at Fermilab and pick their brains, to find out how they got involved in particle physics research. They all had scientists in their immediate family... and they all had artists in their immediate family. This discipline requires a significant amount of creative thinking to develop new theories and answers to age-old problems.

A guy named Dwellephant[*]keeps telling me to approach this show like a little kid, and I think that's how you have to approach the great mysteries of the universe: imagine you're the first one to approach this. It's a playground. Where do you start? Anything is a potential solution, so just start working and imagining the possibilities.

Are you familiar with Steve Martin's play, Picasso at the Lapin Agile? It posits that the processes in art/science are much the same, and also that greatness always comes in threes. What three people, at the intersection of art and science, would you most like to put in a locked room together, along with too much wine and a camera to record the scene?

Grammy Award-nominee banjo player Steve Martin is a playwright? The world is amazing. Also, I'm embarrassed to say I haven't gotten around to this, because theatre is a blindspot for me, and because I have a dayjob and spend most of my free-time reading James Ellroy.

But as for the three people (and the number THREE is significant to the show, as it turns out, so thanks), I'd... huh. I don't know. There's a great book that came out in 2010 called Quantum that I need to finish about Einstein and Bohr figuring out this brand new way of thinking. So maybe I don't have to invite those two.

Honestly, the participants in this show all fit that description, and I can't tell you how amazingly inspiring it has been to hear them share ideas and go down the rabbit-hole which is our Sexy Results show. Anytime three of my friends are talking about this in my vicinity, I'm pretty happy. But Douglas Adams' ghost is always invited.

Describe what Cedar Block will be like at 10 years old. 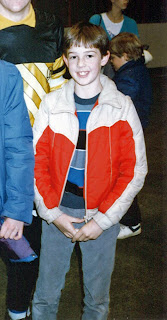 It would be amazing to take this show on the road, but we've got way too many ideas for a group that consists of one guy that has no idea how to make money at this.

Describe what Brent Gohde was like at 10 years old.

Brent Gohde was a 4th grader at Immanuel Lutheran grade school at 10 years-old, and he had his dad as a teacher. Young Brent pretty much only cared about baseball, comic books, and GI Joe. But his parents always took him to MAM for artist lectures (Gordon Parks and Jerry Zucker stand out), took him to the symphony, and always encouraged him at any path he decided to take on any given day.

I'm pretty sure they're okay with the fact that he's stressed out putting on a show called Sexy Results at 36 instead of stressed out closing that merger that's going to net the company a few million dollars I have no idea what I'm talking about.

How much can I swear in my responses?

You say whatever/however much you want  and if it's not okay, we'll just make them pretty symbols instead.

Tickets for "Sexy Results" are available online via Alverno Presents or through Turner Hall Ballroom.


[*] Dwellephant happens to also be the designer of our next Boswell t-shirt!
~
StacieMichelle at 1:38 PM 2 comments:
‹
›
Home
View web version