I'm not sure it's possible for a book lover to return from the literary city of Edinburgh, Scotland, without a heavy suitcase. Every corner of that city offers some reference to a story or song of historical or literary importance, and, during my recent overseas excursion, I felt compelled to pick up a book at nearly every friendly shop and museum. Soon, my husband and I were struggling to find ways to repack our suitcases, which, while we had left some room for souvenirs and gifts, suddenly seemed too small.

Last winter, as I was planning this trip, I read a very short article in Scotland Magazine about The Edinburgh Bookshop, the city's new independent bookshop in the Bruntsfield neighborhood--home, it's rumored, to some of the city's most famous contemporary writers, most notably J K Rowling, Ian Rankin, and, I believe, Alexander McCall Smith. I hoped to tie in an excursion to the shop, but as we neared the end of our trip and still hadn't visited the store, I was afraid we wouldn't have time to get to it, especially since it's a bit off the beaten tourist path and we had already stopped in Blackwell (which, the clerk assured me, was at least more independent than Waterstone's, and deals more extensively in academic book sales). But when we took a bus to Rosslyn Chapel, I spotted The Edinburgh Bookshop on Bruntsfield Place, and told my travel companions that I had to stop there on our return trip into the city. 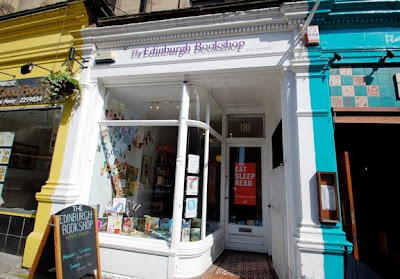 Rosslyn Chapel, by the way, was definitely worth the stop-and-start ride on city bus #15 to the outskirts of Edinburgh, and will be even more worthwhile in a few months when they remove all of the scaffolding that obscured almost our entire view of the exterior. The chapel is one of the most intricately crafted buildings in the world, and its illustrious carvings and architecture have been linked to conspiracy theories and historical mysteries, such as the Knights Templar, the Holy Grail, Freemasonry, and pagan gods and icons like the Green Man. And of course, most famously of late, it was featured in Dan Brown's book and the film The Da Vinci Code. 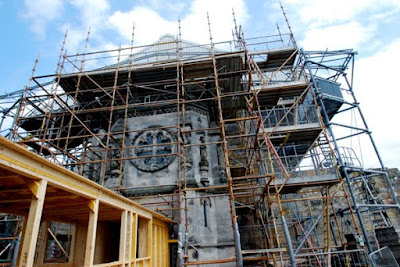 Sadly, it fell into a state of severe disrepair over the years, and earlier efforts to restore it only exacerbated problems created by time and weather. Our guide explained that when the parish began raising money for the building's major restoration, which started in 2006, they had no idea what the book would do for the small town and their fundraising efforts. Where they had once expected about 30,000 ("tarty-tousand") visitors a year, they received that many during the month of August in 2006. She was an excellent guide, and, to our amusement, seemed both fascinated by and indignant about the attention the movie brought to their beloved chapel. 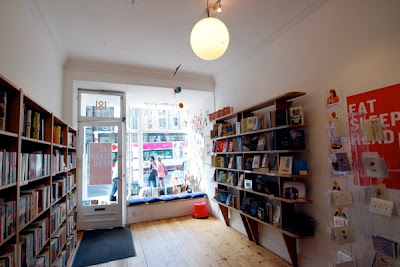 I was eager to get to the bookshop before it closed; shops close early in Scotland, usually between 4:00 and 6:00 pm during the week. Finally standing before it, I felt that I was understanding a common language when I saw the "Eat Sleep Read" IndieBound poster adorning the front door. Ah, home. We entered the small, two-room shop, and were pleasantly greeted by the clerk. I immediately spotted a few telling titles -- The Elegance of the Hedgehog, City of Thieves, The Girl Who Kicked the Hornet's Nest -- and knew I was among good book people. Compared to what I'm used to at Boswell, and before that Schwartz, there wasn't a lot of inventory--perhaps a few thousand books, a very small number of journals and greeting cards, and no other gift items. I introduced myself to the manager, Andrew -- who was not the owner but, like all good booksellers, took ownership of the store -- and we talked about our bookselling backgrounds and some of the differences in titles and covers between UK and North American editions. For instance, the Hans Fallada novel Every Man Dies Alone is there titled Alone in Berlin, and has a different cover image. One of our favorites at Boswell, Little Bee by Chris Cleave, is titled The Other Hand in the UK. 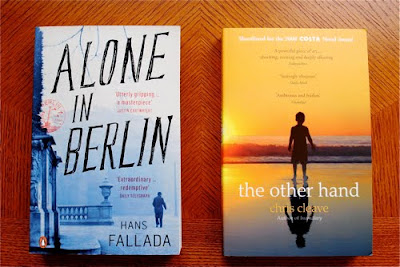 I asked whether he thought publishers might do better in the UK by putting out paperback original editions (or by following the hardcovers quickly with paperback editions), but he said that lots of his customers preferred hardcover editions, especially for collecting. It might have had something to do with the neighborhood, which to me seemed more affluent and local-minded than other parts of the city. 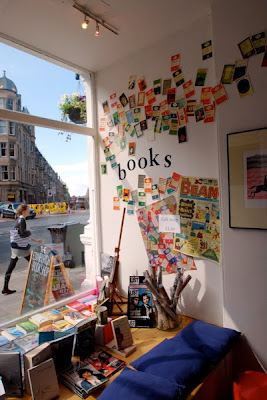 While I browsed, I listened in on Andrew's conversations with a few regular customers. One woman came in for a book she had pre-ordered. Someone had accidentally shelved it, but he knew right where it was and retrieved it for her. There was a sweet moment when he showed off one of the new IndieBound paper bags to a customer, and I overheard him explain to another person that the store had received requests for t-shirts and other memorabilia. The store opened in September, so there was some of the familiar conversation about how the shop is doing, what to expect in the coming months, why certain titles weren't in yet, etc. I purchased a copy of Nicole Krauss' The History of Love (solely for the cover image--perhaps I'll rip the cover off and frame it...I think I just heard a collective gasp from booksellers everywhere), The Natural Navigator by Tristan Gooley (Virgin Books), and, despite its weight, a White's Fine Edition of Jane Eyre. 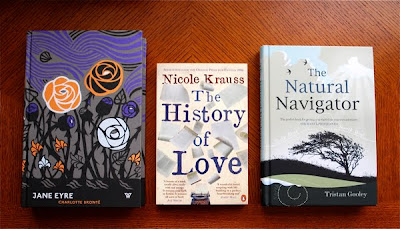 My favorite part of the experience came later that evening when I visited the bookshop's website and saw that Andrew had tweeted about our visit: 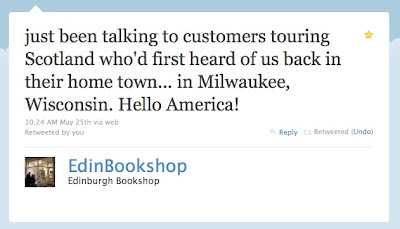 Even though we were there for a brief half hour, seeing the bookshop was a highlight of our trip. Thanks, Andrew and The Edinburgh Bookshop!
Rebecca at 12:07 PM No comments:

Attention!! Boswell Book Company has a spectacular event this Thursday at the Sugar Maple, with two au

thors who have published some of the best that fiction has to offer. It starts at 7pm!

And the first author brought to you by Jocelyn:

If you missed Await Your Reply in hardcover, now is your chance to get it in paperback. And missing it would be a crime, because this novel is one of the best pieces of writing to come out in the previous year. Chaon first showed his craft as a short story writer, in the riveting collection Among the Missing. Even in the novel format, Chaon keeps that crucial attention to detail, giving us stories within stories.

Await Your Reply is rhythmic in its pacing, interweaving the strands of three main characters whose lives intersect and ricochet off the others. Even within each chapter, the story is cut down into brief passages, each one faceted and honed to its own small resolution, like little gems that make up a necklace. The result is like the cycle of breathing; every inhalation demands an exhalation. And like breathing, you absolutely can't stop, because Chaon propels the story forward relentlessly, revealing details with a maddening deliberation. The story itself is an exploration of identity, and of the importance we attach to it. What makes us who we are? Can we change? Can we become someone else? Can someone else become us? Those are the questions the characters pursue. Miles ponders them as he follows the shifting trail of his schizophrenic brother. Ryan clings to those questions as he chases down the truth of his parentage. Lucy wonders about them even as she runs away with her older lover.

As each character pursues the answers to those questions, they draw closer to each other, and to the realization of just how easily identity can be tossed off, shifted, and created…and that within that truth lays a great danger.It's tempting to call Dan Chaon a "writer's writer." After all, the attention to the craft of writing is evident throughout the novel. But that description is misleading. Chaon is a reader's writer. This is a breathtaking story that is pure enjoyment, even while it's breaking your heart. Do not miss it.

And the second author brought to you by Jason:

Coming out tomorrow is easily the most hyped about book of the year so far, The Passage by Justin Cronin. You may remember him from either Mary & O'Neil or the Pen/Hemingway award winning novel The Summer Guest. If so, then you are still not prepared for this gem of speculative fiction, as this is all new ground that Cronin is putting down for himself. I am not going to tell you too much about the book, it is mammoth at over 600 pages. Cronin outdoes himself, he keeps to his storytelling, literary roots from his earlier works and melds it together with page-turning compulsiveness of an epic story a la old-school Stephen King.

The book has two parts to it. In the first part, we meet Amy, the girl 'who lived a thousand years' and a whole cast of characters working on Project Noah. All you have to know about Project Noah, is that it ends the world. It unleashes the virals, a kind of vampire that replicates like the plague. Amy is at the center of it, the heart of it, and the key to it all. But, she is not ready for it, she is whisked away as the world comes to a violent, bloody end. In the second part,

Cronin entrenches us into a self sufficient commune-like town. Where the lights never go off and the cast of characters dream of what the stars look like. They also dream of what the virals would do to them should the lights ever go out. When Amy re-enters, a mystery to all (who could survive outside without any lights at night!), the story splinters again into a long journey, where a group goes off in search of the origins of Project Noah.
This is the epic novel you should read, this is the one that everybody is talking about. Do not miss it, and do not miss Dan Chaon and Justin Cronin live at The Sugar Maple!
Jason at 12:10 PM No comments:
‹
›
Home
View web version