The inaugural bookshopping experience in my future home state of Oklahoma was a very interesting one in which I interacted with two delightful bookshop kitties, drove long stretches of prairie dotted with oil pumps and cattle and although did not find the one John McPhee book I hoped to scoop up, zoomed away from OK with a handful of delightful titles.

The first thing we learned is that when a used bookstore has zero competition it is right easy for this bookstore to price their books to provoke gasps from those bookshoppers who have been spoiled by the likes of Renaissance and Downtown Books. The Used Bookstore in Lawton was one such place, a place where Miss Maple lazed around all over the toppled piled of magazines meowing for pets and the owner played Willie Nelson on the boombox behind the counter of the front room which itself emitted its own bookshopper tractor beam for all the regional titles ranging in topic from topography books to Dust Bowl narratives and Comanche literature & folklore. Although we didn't purchase anything there was a decision made to return to those stacks regularly upon our encampment on the banks of Medicine Creek.

Next we sought out this mysterious Hastings place that touted itself in the phonebook as an "entertainment" store. They are a chain retailer that sells books, music and DVDs. The selection was much less varied than Boswell and set up much like any other chain bookstore save that the books wrap around the center of the shop where the music and DVDs are. The kids bargain section was impressive and I picked up a copy of New Baby Train by Woody Guthrie(himself, a native Okie) and The Juniper Tree and Other Grimm Tales. Bayard got a used Delillo- yes, they also sold a small selection of used titles. The whole set-up was a bit odd but I suppose that without an indie nearby and if we are seriously jonesing for a title we may have to stop in from time to time.

The most notable outing was our hour-long drive into the northern wilds of Texas to Archer City and Larry McMurtry's Booked Up. What is Archer City like? Well, it's just like the small town of Thalia in McMurtry's Horseman, Pass By. Exactly like it, except in real life three of the four blocks that make up the main drag are occupied by the four buildings that house the endless used books under McMurtry's care. The other establishments include The Wildcat Cafe- which for what it lacked in decoration and smoke-free environs it made up for with the best cheeseburger Bayard had had in as long as he could remember; the guy behind the counter also asked, "Ya'll in town for the bookstore, are ya?". 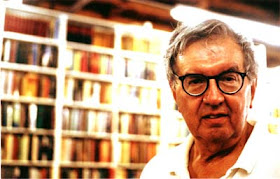 He was awesome, along with the table of old-timers drinking coffee in the back whose conversation subsided when anyone entered the restaurant and picked up again once the entrant(s) sat down. I really wanted to get the 75 dollar signed copy of Richard Hugo's The Lady in Kicking Horse Reservoir but settled instead on a hardcover of Tim Winton's Minimum of Two. On a sidenote, on the drive between St. Louis and Tulsa, on the way down, we happened upon a PRI segment featuring Tim Winton. Lucky, huh? Again, the prices at Booked Up were not as low as I'm used to in used books but the selection was mind-boggling expansive and The Wildcat Cafe was a definite bonus. Our waiter also loudly clued us in on the make, model and color of Larry's car, in case we were looking for him and on the short, extremely hot, walk back to our vehicle, we did see this car and we did see the man in his black-rimmed glasses but refrained from saying anything, mostly because I'm afraid of famous people (esp. ones that have won the Pulitzer) and Bayard isn't very talkative by nature. However, in a perfect world, I would have commented on what a delight it was to be followed around the rare book room by his very chatty bookshop tomcat.
Unknown at 4:23 PM